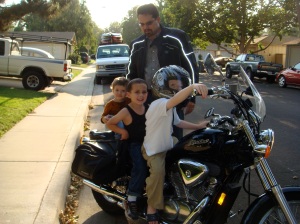 Margo…..hmmm….where to start.   Chris has been eyeing her for several months as he has gone through the requisite training, license appropriation, and insurance shopping.  She purred to him each time he would pass by her foster home on Ocean St. as he drove to work in the sweet gas-guzzling warhorse that we still call Plum.  (Yep, that is the Plum PARKED on the street behind Chris and Margo, banished from the garage forthwith upon the new girl’s arrival).  Everyone, especially Chris’ Mom, is horrified that I have not stopped this affair from commencing.  She has only been with us for four days and yet I am already starting to understand the benefits of polygamy.  She makes him so very happy.  This, in turn, makes me very happy.  The end result is a happy house where there is virtually no need for an adult time-out.  The second night, he took Margo for a sunset ride and the next morning, as I picked up the crumpled pile of ridden clothes from the bathroom floor (yeah, he still does that, it’s not like she is a miracle worker or anything), I had to kill two bugs that he had inadvertently kidnapped during his ride.  I could almost hear the conversation between the two of them.  “What the hell  happened?   There we were flying along without a care in the world and then, BAM, we are trapped in the folds of some day-trader’s leather jacket and now some crazy woman with wild hair and a pink-floyd t-shirt is coming at us with a swiffer duster.”   Bottom line, I told Chris he needs to shake off a little better before coming into the house after he and Margo have been out for a cruise.

Honestly, I thought he would shop around for several months, so that I would have time to wrap myself around the idea of him spending time with someone else.  But alas, two days after getting his temporary license from the DMV, she appeared.

He has let me sleep until 7:30 the last two mornings knowing that he and Margo will be together for a good hour before the temps start to rise.  He comes home with his hair in a helmet-shaped mohawk and a grand-canyon wide grin.  My only fear is that in six-months he may get a wandering eye and want to replace her for a younger, shinier version…..and that simply can’t happen.  I have already grown to love her.

I am a married mom of three boys, still trying to figure out what i want to be when I grow up. However, I can say that any remarkable qualities I may possess are a direct consequence of all the people who have given their love to me over the expanse of my life (which is hurtling toward the deep space of middle age at an alarming rate.). So to all of those people, past and present...thank you for me.
View all posts by tiffandtheboys →
This entry was posted in mom blog. Bookmark the permalink.