Posted on June 8, 2008 by tiffandtheboys 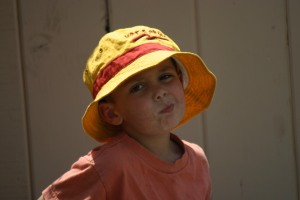 Just as that famous old church hymn “Gladly, The Cross, I’d Bear” caused the toddler to question what the heck an astigmatic bear named, “Gladly” had to do with Jesus, so goeth my three-year-old into the land of misconception and odd aphorisms.  Alex and Sam took me to the store this week with a very short, but essential list of items to be obtained.  While shopping I was blessed with a play-by-play summary of Alex’s favorite Backyardigans episode.   For those of  you not able to receive the Noggin channel, I must tell you that this show is pretty phenomenal.  It involves five critters, not all of whom would necessarily be found in the Encyclopedia Britannica, but who are quite real, heroic, and adventurous nonetheless.  They manage to involve themselves in a variety of situations which invariably demonstrate the importance of teamwork, sharing, manners, respect and bravery; and if that were not enough of a selling point, they also incorporate original choreographed show tunes reminiscent of the Gene Kelley–Esther Williams–Astaire & Rogers genre.   But I digress, so there we were walking through the store and Alex was describing the ‘Medium Showers”  that they had to endure in the space ship on the way to the “Gram Nambula”.  (Meteor showers and Crab Nebulae, duh!)  At which point, Alex stops in his tracks like we had just blown a tire on the cart and said (quite loudly), “Mom!  We forgot the ham sanitizer”.  And darned if he wasn’t right.  We had already passed the soap aisle where such a product might be found.  It was only mildly ironic that the reality of a vegetarian female living with and cooking for four hugely carniverous males, might really appreciate such an item, were it to actually exist.   Anyway, my point (do I ever really have one?) is that ones use of language can be an amazing insight and reflection into personality and perspective.  Alex knows that we use the “ham sanitizer” on our hands to keep them relatively clean, but in his mind perhaps he assumed that it was made out of ham.  He probably wondered why we didn’t just skip the middle man and rub Spam all over our hands.  As for the “Medium Showers” , maybe  it was simply star-rain that was only halfway between small and large in size.  The “Gram Nambula”, is one for which I have no interpretation, other than the fact that when he said it to Mom, she looked at me and with a deadpan gaze said, “Didn’t he play with Crosby and Stills in the 60’s”?

I love having three other pairs of eyes besides my own old, myopic, jaded ones with which to view this rapidly spinning world of ours.  It keeps me just this side of crazy…..and that’s really where we all should be.

Much love to you all,

Who i am is something that has yet to be determined. However, I can say that any remarkable qualities I may possess are a direct consequence of all the people who have given their love to me over the expanse of my life (which is hurtling toward the deep space of middle age at an alarming rate.). So to all of those people, past and present...thank you for me.
View all posts by tiffandtheboys →
This entry was posted in mom blog. Bookmark the permalink.