Posted on September 1, 2009 by tiffandtheboys 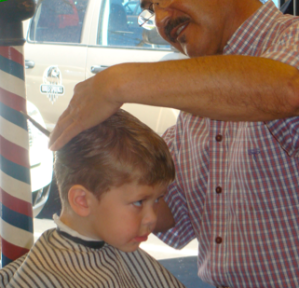 Chris has been needling me for a year and a half to get Sam’s hair cut.  I have been trimming it here and there.  Sometimes I do it while he naps.  Sometimes I trim it while he is playing with Rocket and Leo in the bath.  But all along, I have been trimming it in a futile attempt to put off the inevitable real “First Haircut”.  Ask any mom, and they will tell you, there is a physical and emotional change that occurs when your baby gets their haircut for the first time by a professional.   In little boys, the voice deepens, the sweet little “Why?” questions become a demanding “MOM…….HOW COME????  As in, “How come I can’t have a single scoop ice cream cone for breakfast!!????!”  Before the haircut it was, “Mommy, why are grasshoppers green?”  See the difference?  It is subtle, but painful.  They also begin scouring the pages of the Auto Trader, slouching, and asking for money.

So you can understand why it is with some reluctance that I took my last baby to be shorn like, well….like Samson.   And, Yes, he is my last—for any foolhardy soul out there that thinks I could possibly handle any MORE boys in my home.  We have officially entered the Soccer portion of our parenting program, and have firmly taken leave of the gestational portion.

We have a regular barber that has been a staple in the boys lives for the past four years or so.  He is one of those old-fashioned barbers with the red, white, and blue pole, the checker board for the gents that are waiting, and a mirror that runs the length of the joint.  He is pretty great.  Suffice it to say, he is on our Christmas card list.

The day before Z. began second grade and Alex started Kindergarten, I decided (what was I thinking?) to get Zach a haircut, and then see if Sam was up for his first one, too.  It was silly of me to even think that Sam had been the one dragging his feet all along.  I mean, this is the kid who already owns a backpack, a lunchbox, and dresses in his best school clothes even though his only place of matriculation has been the Kid Corner at the Y for 45 minutes at a time.

So sure enough, after Carlos (I think he actually goes by “Charles”, but the kids have locked him in as Carlos, so that is who he is to us) had finished Zach’s “doo”, we asked Sam if he wanted one.  He was up in the chair before I could have even screamed, “WAIT, I’M NOT READY!”.  So I watched, and took pictures over the next twenty minutes as Carlos transformed my sweet, chunky-cheeked little Sam into a three-foot tall Fuller Brush man.  For those of you not older than DIRT, as I am, a Fuller Brush man was a door-to-door salesman in a shirt and tie who would attempt to sell brushes and cleaning paraphernalia to housewives in the 1950’s.  The only thing Sam was missing was a pocket protector and a clipboard.

I blinked back tears and I paid Carlos for ripping my heart out.  Then I told Sam what a big, handsome boy he had become.   I have lots of amazing memories from this summer.  We went on a Pirate boat in SB; I took my 91-year-old Gram down to the Sea Center on the pier, and we all touched a tiger shark; we went to Disneyland for two days  in the middle of summer with just a few kajillion other people from around the world (yeah, I know….crazeeeee!); we walked through hundreds of butterflies at the Natural History Museum; and finally, I walked out of the door one morning in August with two school boys and one curly-headed toddler, and when I came back home that afternoon, I had three little men.

They don’t come with warning labels, you know.  They should.

Warning:  they will suck every ounce of energy from your body daily; they will force you to listen to the “Batty-Bat” song on the Sesame Street CD 582 times in one afternoon; and they will take your heart in their grubby little hands, and love, stomp on, hug, kiss, and torment it until they feel like handing it back to you for “safe-keeping”.

I hope you all are well and safe and holding tight to those hearts that have been through the ringer.

Who i am is something that has yet to be determined. However, I can say that any remarkable qualities I may possess are a direct consequence of all the people who have given their love to me over the expanse of my life (which is hurtling toward the deep space of middle age at an alarming rate.). So to all of those people, past and present...thank you for me.
View all posts by tiffandtheboys →
This entry was posted in Raising kids and tagged First haircut, growing up. Bookmark the permalink.