Posted on February 19, 2009 by tiffandtheboys 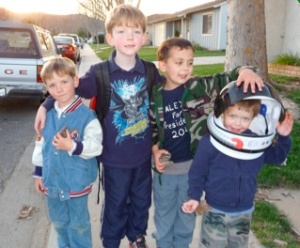 Alex had a buddy over the other day for the afternoon.  They call these things play “dates”, but when it involves four boys playing within the confines of a single family dwelling it simply transcends a single-word descriptor.  In case there is any confusion….that would be Luke Shelly (NOT LUCAS) on the left next to Zach, Alex, and Sam.  Alex and Luke spent the afternoon building forts, and debating the merits of laser-shooting eyeballs over lightning bolts for arms.  At one point I thought they were fighting, but when I got closer to the closed door of Alex’s room, I realized that they were using there “Guy” altercation voices.   As in, “My ‘guy’ has super freeze powers and can freeze your ‘guy’ for  a grillion years.  This is said in a much deeper voice and with animosity that would ordinarily never flow between Alex and Luke.  They had a  ball.  At one point, Luke came tearing out of the room and asked if he could have one of Alex’s special chocolates (of which I did not know, and which Alex has been hoarding since Valentines Day)…..I said, “uh sure”.  As he raced off he turned back and tossed over his shoulder, “Hey, don’t tell my mom, okay?”   So that’s great, now I am co-conspirator with a completely unrelated child as well as being one to all of my own.

Sam is finally talking; it’s mostly discernible, and very passionate.  He knows how to convey the essentials.  Milk is “Monk”.  Chocolate is “Chwochate” Alex is “Ackie” and Zach is “Zeeka”.  That is really all he needs to know.  His accent is reminiscent of a mechanic from Jersey, but then, Zach had quite a Middle-Eastern ring to his words for awhile.  It is so fun to see this strong, smart, lippy, little person emerging from his cocoon (okay, the lippy part isn’t so great).  But, I am reminded daily of how quickly fall becomes winter and winter begets spring….and then comes cell phones (I shudder to think of it).

Who i am is something that has yet to be determined. However, I can say that any remarkable qualities I may possess are a direct consequence of all the people who have given their love to me over the expanse of my life (which is hurtling toward the deep space of middle age at an alarming rate.). So to all of those people, past and present...thank you for me.
View all posts by tiffandtheboys →
This entry was posted in mom blog and tagged boys, growing up, Milestones, playdates. Bookmark the permalink.